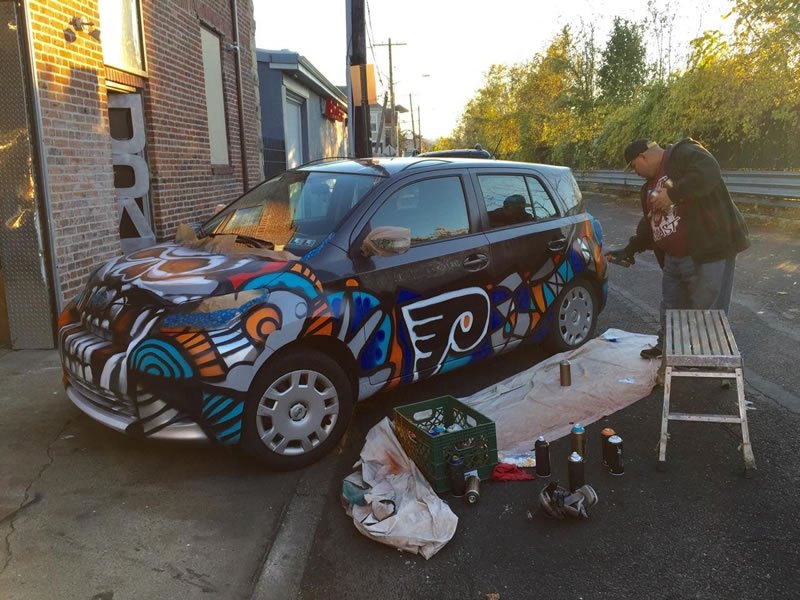 First there was Art All Night – an annual, twenty four hour art party held in the former Roebling Wire Works factory building in Trenton, New Jersey. Then, there was Art All Day. Since 2012, Art All Day, Trenton’s city-wide open studio tour – and all around arts festival – has illuminated the cultural life of New Jersey’s capital city.

I have been participating in Art All Day since it’s inception. Much of my work is on-sight murals and custom projects so I only have a small home office. So for Art All Day I team up with George Zienowicz at Z-Signs, 202 E Canal St. Trenton, NJ.  George has helped me with numerous projects over the last few years and is a great friend. Normally, Colleen Larkin-Ayers does a pottery demonstration but this year she took the year off to see the rest of the sights at Art All Day.

I was supposed to paint fellow artist, Jesse Vincent’s  Scion XD at this years Jersey Fresh Jam. As time wore on  and I was swamped working on other pieces I knew that I would not be able to get to it at that event. We agreed that I would work on it at the next event which happened to be Art All Day. It was a neutral grey so it would work with almost any palette.  I talked with Jesse and she agreed to give me free reign to express myself.  I asked her if she had any ideas and she said that she loves the Philadelphia Flyers! So I decided just to rock with it! I wanted to limit the design so that I would be able to finish during Art All Day, so on the sides I only painted the bottom half of the car. The first step and biggest pain in the ass is masking and scouring. I carefully masked off all the lights and scuffed all the areas of the car that I was going to paint.

I started with the hood and painted a skull because she is “punk rock” and also I thought it would look mean coming at you. I also like to use the back of the vehicle to be a face using the back window as shades. With the front and back worked out I used the dynamic abstract designs and patterns to connect the front and back. On the drivers door I snuck in the Flyers logo and on the passenger side I added the Philadelphia skyline.  From there I used my blues/oranges and grey scale pallete and went to town. It all came together nicely.

It was great meeting and talking to the new people that came around on the tours. So until next year!