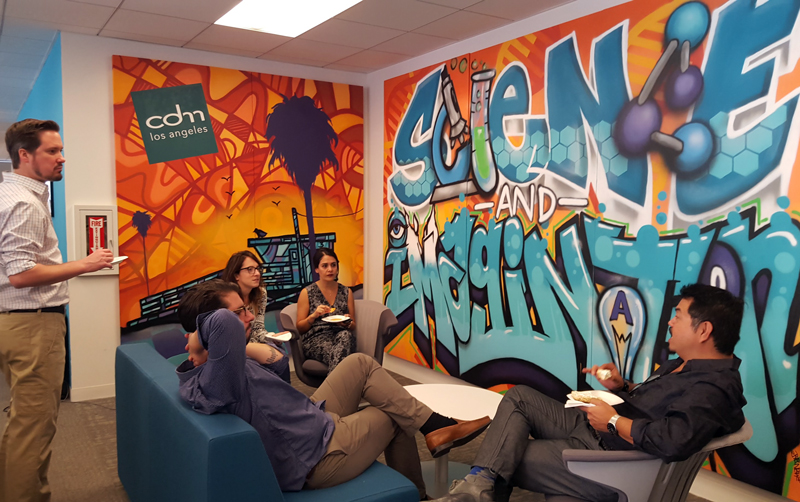 About 5 years ago i was contacted by a party planner to do murals for a hip hop themed Bar Mitzvah. I created the pieces for the event at the Trenton War Memorial. In September 2015, I was contacted by a global advertising agency CDM (Cline Davis & Mann), to create graffiti-styled murals for their Los Angeles office. I was referred to them by the family that I created the murals for the Bar Mitzvah. Over the next few months we planned out the process and I took their ideas and did computer generated mock ups. In early December 2015, I flew to San Diego to start the project. I enlisted my good friend and fellow artist, Isaias Crow to help me with the project.  I painted the murals at his outdoor studio in San Diego. I painted 2 murals which were made up of 5 panels. The science and imagination mural measured 12ft x 8ft. The mural represents the company’s declaration “We are fearless partners who combine science and imagination to create the exceptional”. I mixed letters with symbols to create an amazing mural that represents the company’s style and flair. The 7ft x 8ft dynamic abstract life guard stand pays homage to LA and the company’s proximity to some of the best beaches in the world.