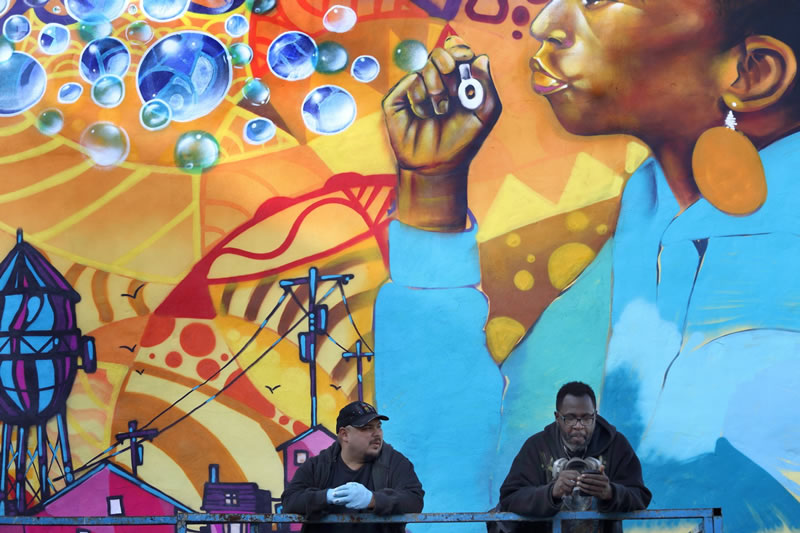 Taking Back Trenton from Cynthia Groya on Vimeo.

SAGE Coalition is the heart and soul of the capitol city of Trenton, NJ’s arts community. With its recent mural production, “City of Dreams”, it further reiterate that sentiment.

Sponsored by the ETC (East Trenton Collaborative) and designed by William Kasso, the idea came about while discussing different visions for a youth themed mural. Kasso, who has a long storied history in the production of youth murals, brought up the idea of a kid blowing bubbles over a city landscape. He then enlisted his longtime friend and frequent collaborator, Leon Rainbow, to co-produce.

Leon Rainbow drafted up an abstract surreal background, full of bright yellow, oranges and reds, along with a festive cityscape to balance out Kasso’s massive image of S.A.G.E. member, Rocky Kelly’s daughter, Dreamy.

The bubbles were created with the help of children during a after school art workshop sponsored by the East Trenton Collaborative and Habitat for Humanity. Kasso, Rainbow and Earlie Harrell lead a workshop of roughly 20 students to create dramatic images of bubbles with blue hues and abstract patterns.

The bubbles were installed within the mural using a high density adhesive called Nova Gel. Once the bubbles were placed, Rainbow finished off the background while Kasso continued to work of the image of Dreamy, which stretched from the top of the wall down. The entire figure measured about 25 ft once completed.

The two artist worked in unison while Cynthia Groya, a Harvard University undergrad, documented the process.

Rocky Kelly, S.A.G.E. holistic health guru, wrote the passage to sum up the vision behind the mural, which reads: “In the City of Dreams, a dream can be fulfilled as easy as a child blowing a bubble. It is the power of your intent that will determine how big or small your dreams become”.

The entire production took 4 days; capped off by Earlie Harrell…aka…Messiah, slapping on a few layers of clear coat to seal the wall.

Leon Rainbow and William Kasso. Many call them the dynamic duo of the Trenton Art scene. Each artist has created more works of public art in the capital city than any other artist before or since. Its a pleasure to watch these two artist work their magic…especially in a city like Trenton, NJ; a city struggling to regain its former identity of prosperity and glory.

“Trenton makes the world takes”. That statement is world renown..and so are its artists. The City of Dreams is not only a beautiful piece of public art, but also a vision of what could be.