The year was 2005. Leon Rainbow and William Kasso, two local artists, collaborated on their first mural together. At the time, each artist was only acquainted for a short period; less than a year, and each of their names was beginning to rise in the local art scene. The idea came up to produce this mural while brainstorming different opportunities to evolve their work, while watching graffiti bombing videos at Kasso’s apartment. The opportunity to work together on a groundbreaking project like this was tremendous. That project was the Martin Luther King Memorial Mural.

The original mural, which was created in the 1970s by an unknown artist, was falling apart. It was simple in execution; red brushed block letters with a white background. The two artist designed the new mural with the intention on focusing on MLKs image and message. 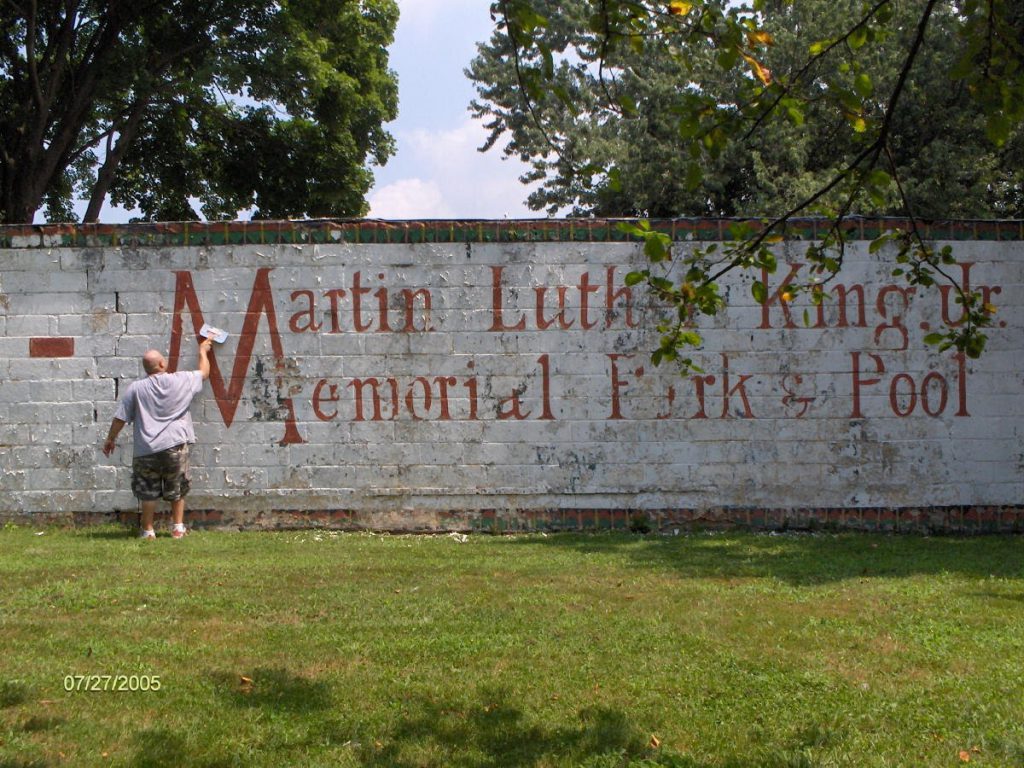 The original wall by unknown artist

The two worked for hours…12 to be exact..in 115 degree heat. They battled a swam of bees…and a rain storm. But alas, after a full day of trails and tribulations, the wall was complete. It was met with great fanfare and press coverage. The mural put the two graffiti artist in the local limelight and got the kind of attention that most in the graffiti scene would cloak themselves from…it made there faces known.

Since ’05, many murals and projects from each passed. In the fall of 2016, the two artist, now season wall art veterans and each with international recognition, decided to redo the MLK wall, which fell to years of decay and neglect. With proceeds raised from a Go Fund Me campaign, the two artist set out to update this iconic mural yet again.

Leon focus was the background imagery and quote, while Kasso focus was on the portrait. The quote:

“Its a great quote, especially in the way it promotes a healthy way of solving conflicts”, say Leon Rainbow.

Leon chose a bright red font for the quote that was balanced out by a baby blue colored sky and titanium white fluffy clouds. Kasso’s portrait centered the wall with a straight forward rendering of Dr. King, while in giant bold white and red letters, the word DREAM stretched across the right half of the mural.

This was a quick production…taking all of two days to produce. During their time working on the mural, the two artists shared tons of laughs and good vibes, no different than 11 years prior. The community response was at first, not so pleasant…mainly because they thought the artists were removing the previous work out of disrespect. Once the community dialogued with Kasso and Rainbow, did their collective fears began to ease.

The work ethic of these two artists and the energy it takes to constantly answer the call to create these masterworks is phenomenal. The neighborhood and city of Trenton owes a huge debit of gratitude to these gentlemen. Art is life and its consistently provides an outlet to many who otherwise have no voice. Its the missing positive link in a chain forged out of hopelessness. Art matters. Trenton matters. Art is the message…and S.A.G.E. Coalition is the method.