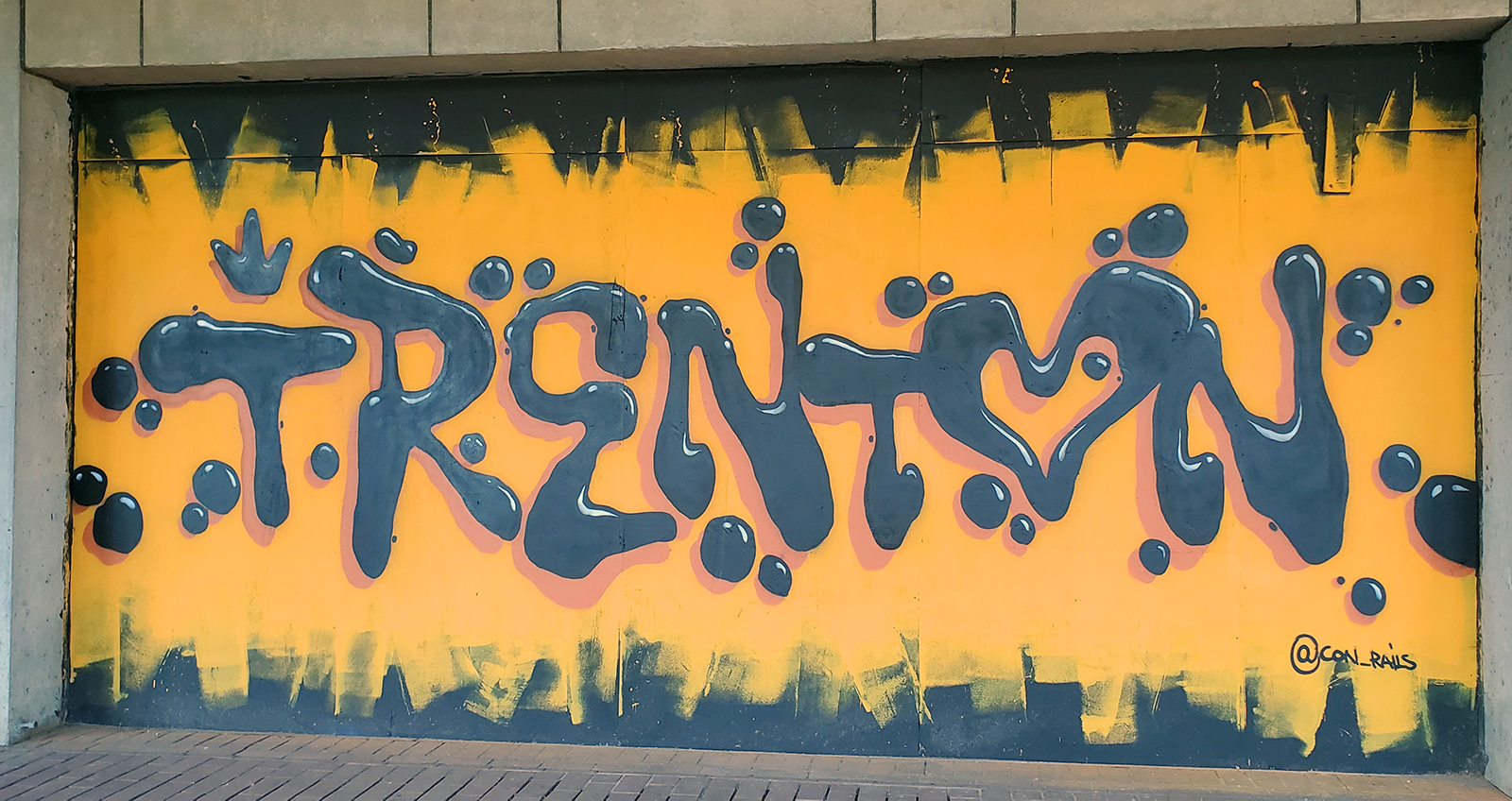 Funding from the New Jersey Council on the Arts Creates Opportunity for ore community-based initiatives.

Trenton Downtown Association (TDA) is pleased to announce that it received a $25K grant from the New Jersey Council on the Arts to support continued community-based arts programming, including the popular “Murals on Front Street” project. This much-needed financial boost has made it possible for TDA to partner with Trenton artist Leon “Rain” Rainbow for the fourth consecutive year in bringing live mural painting to Front and Broad Streets in downtown Trenton.  Murals on Front gives different street artists each week a chance to transform boarded up panels of an old parking garage into striking, meaningful works of art. The live painting begins on Thursday, July 30th and will continue with new murals created by a dozen local artists through September 20th.

“We are overwhelmed by the support we have received over the years from the New Jersey Council on the Arts,” says Meaghan Singletary, Development and Project Manager for TDA. “This year we are especially grateful to have the opportunity to redirect funds originally slated for the Levitt AMP Trenton Music Series concerts in a way that positively impacts our community and shines a light on Trenton when the city needs it most.”

For the past three years, living mural painting took place on Front and Broad Streets in Trenton during with the Levitt AMP Trenton Music Series, a TDA-sponsored series of 10 free concerts in the Mill Hill section of the city. “Our goal has always been to reach a wide audience through art that resonates on multiple levels, “By painting during the concerts, which brought so many people into the city, we were able to do that,” says Rainbow, who is curating the 2020 live art show.

While the 2020 concert series has been postponed until 2021 because of the coronavirus pandemic, a virtual concert has just been announced for August 16th, with Trenton-born music legend and city ambassador Sarah Dash headlining the show. Ms. Dash is an award-winning soul, funk, and disco singer-songwriter and one of the original founding members of the group LaBelle.

“Right now, we could all use a little more positive energy and joyful, creative expression in our lives,” says Rainbow. Murals on Front, along with the virtual concert, brings the Levitt AMP Trenton Music Series back to life, in more than spirit.”

Rainbow is best known for combining graffiti, street art and other artistic forms into innovative projects and events. He has planned an exciting lineup of local talent, beginning

With Dean “RAS” Innocenzi and R Fab, who will be creating the first two murals

RAS, who picked up a can of spray paint in 2007 and never looked back, is best known for his signature style of semi-realism. R Fab is an experienced self-taught artist who works primarily in aerosols, acrylics and tattooing, but has experience with a wide variety of mediums.

“This has been such a wonderful collaboration with Leon that would not have been possible without the generous support of the Trenton Parking Authority, who has allowed us to use the panels on an old garage and turn them into art,” says Singletary. “The NJCA grant is also making it possible for TDA to bring two additional arts initiatives to the community: another mural series called “We are Survivors” in partnership with the Trenton Health Team, and a neighborhood-based sidewalk chalk project.

“By continuing this effort, we can encourage the ever-thriving creative community within Trenton to spread a message of strength and resiliency outward.”