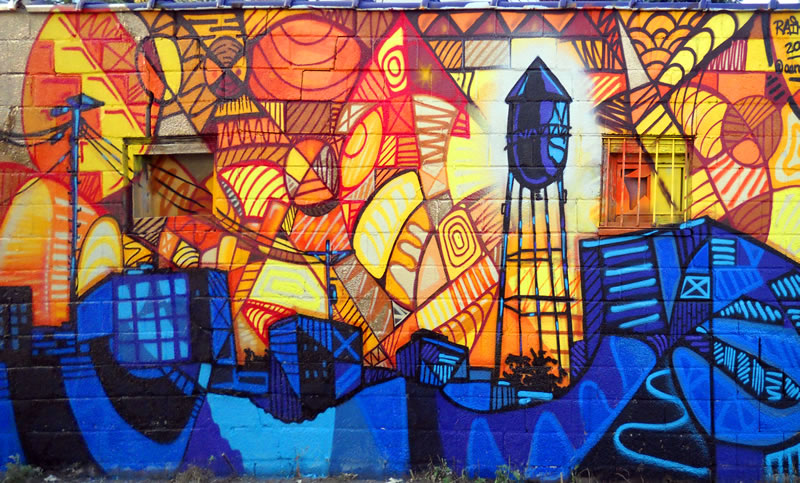 If artist Leon Rainbow is smiling at the small canvases he’s lined up on the floor of his studio on the second floor of in his brick home on Third Street in Trenton, it may be because he is up to something.

The respected graffiti writer known for his large and powerful street pieces and murals is metaphorically going indoors for the month of May with an exhibition: “Politically Incorrect — New Work by Leon Rainbow.”

It opens Friday, May 2, with a reception at Trenton Social restaurant on South Broad Street from 6 to 10 p.m.

The title relates to the artist’s understanding that his work in graffiti is often disparaged because, he notes, such artists speak the truth. There is also a sense of humor that hints to Trenton’s mayoral election next month and the problems wrought on the city by politicians. Postcards and flyers for the exhibit show bars and stars in red, white, and blue.

While the series of canvases and three-dimensional objects the 38-year-old artist is assembling for a month-long show may seem a departure, they’re part of a process and a broad-brush imagination.

“I started doing water colors in 2010,” he says. “I did a free style on Friday every week for a year. I would use water colors and mixed media to experiment. I got a certain process with that, and I started to include the acrylic paints that I was doing. Then in November or December (2013) I did a wall on Clinton Avenue and Hudson Street that incorporated a lot of styles and patterns that I was working with. From there I have been mixing — abstract, graffiti, and fine art.”

Calling his new process both fun and challenging, Rainbow says that he has been working steadily on these smaller new works to build up a solid and varied body of work. “I have 20 pieces (for the show): canvases, paint cans, and some added surprises,” he says.

The cans are art objects, small sculptures colored with the same style and colors that he uses on canvas and walls. “It’s three dimensional. I find the old cans after they’re rusty, take this real thin paper, and gesso it. I use the same gel medium that I use to seal the can and then — once it stops the oxidation process — I use the gel to adhere the paper to the can. One of things that I like is in the patina and the rust, there are bright colors coming out of it. A lot of naturally occurring things are interesting. I already sold a bunch of them so I have to make more.”

Another three-dimensional element in the show will be a painting on a mannequin, something similar to what he does when he practices body painting. “There are two different types of body painting that I do. One is for events. It’s more like a show. It can’t be totally nude. You’re painting around clothing or stuff. It gives the events a little bit of flare.

“The other type is nude and for photography shoots. So it’s like using (a body for) a canvas. But it’s different from the canvas because it moves. Being a graffiti writer is finding that everything is horizontal. Body painting is vertical. One of the challenges is to get the painting to flow right on the body, flowing with the natural curves of the body. You don’t want it to be stiff. It’s not like painting a still canvas. You want the piece to accentuate the type of the body. Or use the type of the body to make it look like something else.”

Rainbow says that he started doing body painting — as he does with other art mediums — “because I thought it was cool. But then I worked with another painter and she showed me what paints to use and how to do it. When I started to learn I started to think it was really cool. A lot of has to do with the photographer. That’s as important as the way I paint.”

What else is important to him is to mix up ideas. “I like to do new things. It’s refreshing, a change. I’m an expert at using spray paint and moving to another medium. I like working on different ideas.”

That includes commercial projects like the recent design he created for the Miller Brewing Company on a wall on Frankford Avenue in the Fishtown section of Philadelphia.

Rainbow (his family name from the Quechan tribe in Arizona) was born in San Jose, California. He came to New Jersey when his draftsman stepfather and mother moved to the state in the 1990s. With a lifelong interest in art, encouraged by his mother, Rainbow studied drafting and art at Mercer County Community College, taking classes with artist Mel Leipzig. Through the years he has established himself as master graffiti writer and muralist.

Rainbow — who in addition to working as a computer programmer for Inforest Communications in Princeton has done murals for the corporate office of Inc. Magazine in New York City and Louis Vuitton stores — explains the genesis of the Miller project: “I met a guy at a jam, maybe four or five years ago in Erie, Pennsylvania. He started working at an ad agency. He pulled me in. They (Miller) were doing a national campaign. The way that it worked they wanted me to follow their color scale — gray and red — and I had to put their logo in it. Then they let me do whatever I wanted. It was incredible. I feel that an artist works best when you let them do their own styles and ideas. With commercial work you have to juggle how much creative control as to how much the project is worth. It’s great to work in your style and be paid for it.”

Yet the two-phased outdoor project — seen on YouTube at bit.ly/1lagAuo — was challenging because of timelines and weeks of cold and snow.

“First I primed the wall and put the logo up and did straight abstract designs. I took a picture and sent them the picture. Then a rep from the ad agency and videographer came out and filmed the entire process of the second wall. A lot of it is figuring out what kind of themes I want to work with and making it work with my style,” he says.

The style he’s recently developed, he says, “is kind of abstract designs mixed with graffiti — a lot of the designs I use in graffiti but I do it in a different way. I need a name for it.”

While snow can make painting outdoors difficult, Rainbow shrugs it off. “I painted a lot in this winter. I painted in the past every weekend no matter the weather. Sometimes I get cabin fever. If I’m in the house too much I have to go out and paint. I have to be ready for the weather, but it’s not all favorable.”

It provides some experiences and discoveries. “What’s interesting (about painting outside) is the different textures. It has unique challenges that you just don’t get in the studio,” he says.

Asked how many graffiti writings he has done, he says, thinking aloud, “Since 2005 I’ve done at least 50 pieces a year so I would say about 500 but more than that.”

The studio, he says, is a miniature extension of his usual workspace. “A lot of my work is on the street, so Trenton is my studio. I can do small work. But it works for me. I wasn’t using it and just started over the last year. My wife helped me set it up.”

He and wife Marie — a teacher and administrative assistant at a Trenton pre-school — have been together for 10 years. “I invited her out to go to Dunkin’ Donuts and things just started to click,” he says.

“When I was teaching kids, she helped me for a year. She’s not an artist. She helps me with some stuff. I use her as a sounding board to get a regular person’s opinion — her brutally honest opinion. Depending what she says I work on it some more or don’t.”

While Rainbow plans to continue with the aerosol on outdoor walls, he is also looking for new ideas. “When you start working in a different manner or mixing mediums, you look at things a different way. When I start something new I have to learn about it. Things don’t work out. I make mistake. I like learning about it.”

One recent discovery was glass mosaic. His friend, Philadelphia graffiti writer Juan Dimida, is an assistant to mural artist Meg Saligman and invited Rainbow to visit her studio. “It was amazing what they were doing. If I could get the right walls, it’s more permanent. He just showed me some mosaic, and it looks like I’m going to do that. If you look at the pieces that I am doing, it goes perfectly with stained glass. But I have so much going on right now I don’t know if I can get to it until the end of the year. It’s something I haven’t done before. So I want to play around with it.”

But right now another thought fills his head. “I want to do the water tower,” he says looking at a canvas. “One more big one for the show.”

Social Bike Ride, Trenton Social, Saturday May 3, 6 p.m. Bikers tour public art and murals in the city by artists Will Kasso and Leon Rainbow, who will explain the history of their work and its role in building an arts community in Trenton. Stops will include East Hanover Street, the Trenton Atelier, and other hidden gems around town. $10 includes a pasta dinner and beverage. All ages and abilities are welcome.
Facebook.com/TheSocialRide.