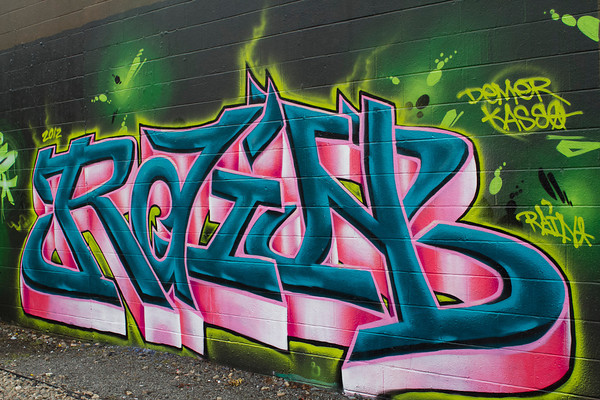 Donning a gas mask, Leon Rainbow begins work on his latest “throw up.” His movements are swift but steady, consistent in their pace to prevent dripping or underexposure. There is no wasted movement, each time he finishes a line, the next is already underway. The chatter has almost ceased now, and the smell of aerosol has filled the air.

It is a cold, wet, overcast February day at the Terracycle building in Trenton. The misty rain has forced the graffiti artists to setup their equipment in a converted garage attached to a courtyard on the rear of the building. Every wall in sight is covered in dazzlingly colorful murals and throw ups. One of the other artists has already begun work on his throw up, the sound of his solitary spray can’s staccato notes periodically punctuates the oppressive silence. Leon Rainbow arrives with several more artists and he chats and jokes with them as they map out the space they’re going to be working with that day.

Actively creating graffiti art for more than a decade, 37 year old MCCC Alumnus Leon Rainbow’s arrival in Trenton in 1999 was a matter of necessity, he was trying to take himself away from people and environments that had led to a drug habit. “When I was younger I got involved in drugs and stuff like many people… Eventually I went to a twelve step program and I got clean. From there, my life has been a lot better,” said Rainbow.

Since coming to Trenton, Leon has thrived, becoming one of the more influential artists on the Trenton art scene. His chosen medium, graffiti art, often exists on the wrong side of the law, but Leon has found avenues of expression that are legally acceptable. “I’ve worked with almost everyone in the city so far as all the different arts, nonprofits in one capacity or another, city hall, parks and recreation, I’ve had stuff in the city museum, the state museum, and I think the city has really kind of embraced what we do to an extent,” said Rainbow.

Through his work, Leon has become a fixture in the Trenton Community. “He’s got a really big following,” says Craig Shofed who is the chairperson of the administrative council at Turning Point United Methodist Church. “He’s kind of an ambassador, he’s got a really wide each.”

One of the ways that Rainbow gets involved with the community is hosting graffiti-centric art classes for students of all ages at the Turning Point church. “His art speaks to young people,” said Schofed.

Using a room he bartered for by painting a large mural on a wall leading up to an entrance to the church, Rainbow gives lessons on not just the how of graffiti, but also the history. He brings in guest speakers including members of his graffiti crew, Vicious Styles Crew. Anytime he isn’t speaking he is very hands on with the students, giving them individual attention and the admiration the students have for him is obvious. 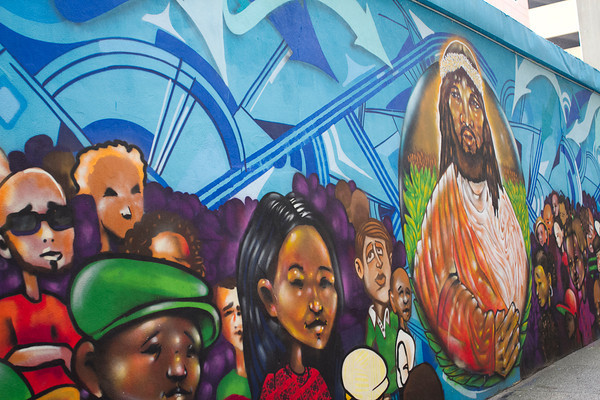 Malcom Matheson, a twelve year old resident of Egg Harbor Township travels for over an hour to attend the class. “Graffiti is another part of my life, so I can be like Leon and get paid to do walls and stuff like that, it would be awesome for me,” said Matheson.

“It’s really just trying to teach people the history, the styles, the techniques from A to Z. Graffiti is one of those things where you can’t really fake it you know? You can fake it but not to people that really know,” said Rainbow.

As a youth, Rainbow was raised by his mother, Tereasa Collings and his stepfather. His love of art was evident from a very young age. “He had a ton of energy and he was always buzzing all around, but if I could sit him down and give him some art supplies, even at two and three and four, five years old, he would be involved in it… he was the kid who wrote all over the walls with crayons,” said Collings.

Rainbow fell in love with graffiti in particular by the time he was in the first grade. “When the graffiti movies first came out in the 80’s that really made me like ‘wow!’ when I saw the people painting on the trains and stuff, I was like ‘wow! That’s cool!’ and I always wanted to do it from then,” said Rainbow.

When Rainbow was a teenager, his mother and stepfather divorced and he began to spend less time at his mother’s home in Ringwood, New Jersey and more of his time living in East San Jose with his grandparents so that he could be around male role models. Within a few years however, his grandfather developed cancer.

“My dad was probably as important to Leon as any male figure I can think of, probably even more so than his own father. My dad was always the rock. When my dad got lung cancer, they were going to radiation therapy, and doctors, and had his lung removed and they got involved, well Leon got involved too, in graffiti.” said Collings.

After a few years Rainbow moved with his mother in New Jersey, the area he was living in was not conducive to being young and unsupervised. “He was in East San Jose, that was a do or die situation every day,” said Collings.

Being a graffiti artist, Rainbow is keenly aware of the legal complications that may arise from his work, and the judgments people may have about it. Any public projects Rainbow works on are on surfaces that he has permission to paint on. “If I said ‘oh yeah I’m a graffiti artist’ they might think gang graffiti right away just because they don’t know. But I think if people actually see what we do they would have a different understanding of it,” said Rainbow.

One example of the work Rainbow does to help build community when Vicious Styles Crew participated in a project with the Sage Coalition, a group that organizes beautification projects for the city of Trenton through local artists. For three days Vicious Styles Crew helped paint ten abandoned buildings on Hanover Street in downtown Trenton.

“It’s inspiring to me when you’re able to either change peoples perception or that people are really behind you,” said Rainbow.

Married for five years now to Rosemarie Smith, Rainbow credits her with helping keep him on an even keel. “It keeps me grounded. If I get too caught up in the things that I got going on and being an artist and let that fame or whatever get to my head, I can get real kinda crazy with it. She always keeps me grounded, she gives me that unadulterated point of view.”

“Graffiti is a very powerful art form,” said Rainbow. “You can either create with it or destroy with it. It depends on what you want to do. Today I’m trying to create; I’m trying to build the community.”