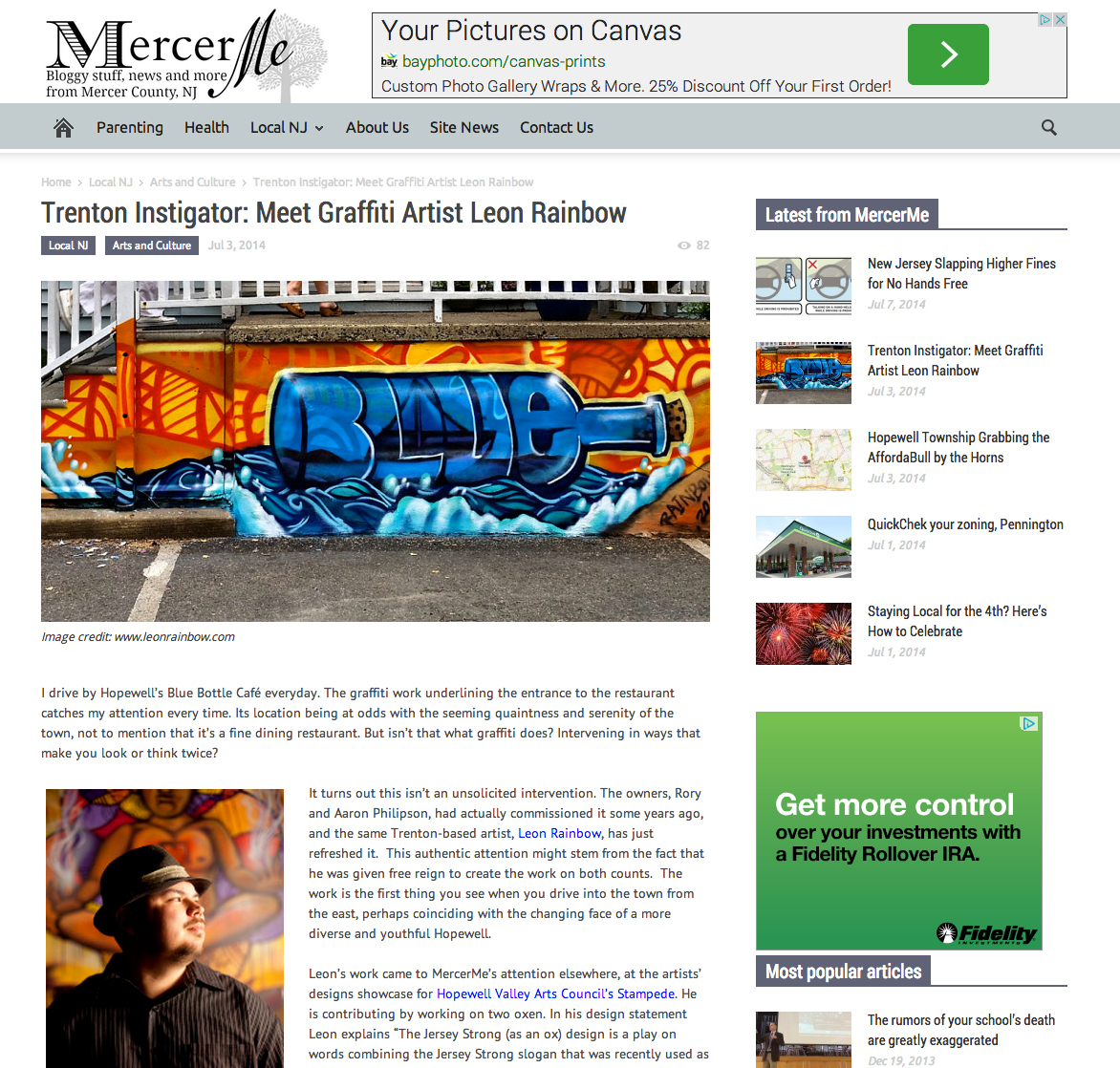 I drive by Hopewell’s Blue Bottle Café everyday. The graffiti work underlining the entrance to the restaurant catches my attention every time. Its location being at odds with the seeming quaintness and serenity of the town, not to mention that it’s a fine dining restaurant. But isn’t that what graffiti does? Intervening in ways that make you look or think twice? 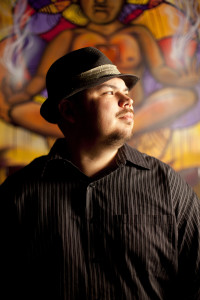 It turns out this isn’t an unsolicited intervention. The owners, Rory and Aaron Philipson, had actually commissioned it some years ago, and the same Trenton-based artist, Leon Rainbow, has just refreshed it.  This authentic attention might stem from the fact that he was given free reign to create the work on both counts.  The work is the first thing you see when you drive into the town from the east, perhaps coinciding with the changing face of a more diverse and youthful Hopewell.

Leon’s work came to MercerMe’s attention elsewhere, at the artists’ designs showcase for Hopewell Valley Arts Council’s Stampede. He is contributing by working on two oxen. In his design statement Leon explains “The Jersey Strong (as an ox) design is a play on words combining the Jersey Strong slogan that was recently used as a rallying cry post-Hurricane Sandy in New Jersey with the cliché Strong as an Ox”. Curious and excitable as we are at MercerMe, we had to find out more about him.

For the most part of my interview with Leon, we spoke about his community driven work and it became very clear to me that he is quite the social instigator. He moves on from one project to the next, often juggling many at the same time whilst staying loyal to key projects and spaces that he has been part of from the onset.

Leon has just wrapped up a major solo exhibition of new work at the Trenton Social titled Politically Incorrect. On his website he explains that the exhibition unintentionally coincided with political turmoil in Trenton. “I am an artist first, but what’s been going on in city politics adds a new dimension to the work… You look at City Hall, then at us painting the truth out in the streets and you wonder, who’s really politically incorrect here?” 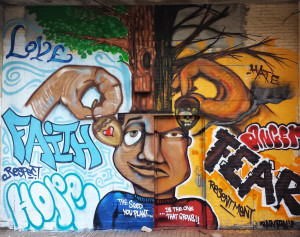 Coming up next in Leon’s busy calendar is the Jersey Fresh Jam, “Trenton New Jersey’s Premier Urban Arts Festival” on Saturday August 9th. The event has been going from strength to strength Leon proudly explains. Now in its ninth year, it presents no less than fifty graffiti artists, live painting, live music, vendors and much more, from 12 till 6pm at the Terracycle Complex.  Later on this year, Leon takes part in a group exhibition titled Subway to Gallery: the Street Artist, at the Robert Wood Johnson University Hospital in Hamilton from September 18th till November 13th.

Last but certainly not least, Leon speaks to me about a project that clearly occupies a special place in his heart.The S.A.G.E Coalition Inc is a coming together of local artists, collectives, organizations and spaces on a quest to beautify the inner city. He particularly mentions an ongoing strand in the project named Windows of the Soul, “aimed at bringing life to blighted urban neighborhoods [with] artwork in the windows of abandoned buildings in local neighborhoods”. The Coalition also curate exhibitions at Gallery 219 in Trenton.

Thank you Leon for opening our eyes to the vibrant world of Trenton urban art, we can’t wait for the Jersey Fresh Jam!