Windows of Soul – How Art Takes Back a Street – US1 Newspaper

Reprinted from the September 19, 2012, issue of U.S. 1 Newspaper
Windows of Soul – How Art Takes Back a Street
by Dan Aubrey
The decaying facades of one of downtown Trenton’s oldest blocks will be transformed into an outdoor art gallery when a group of motivated artists — and art loving volunteers — join forces during three days of art, education, and urban beautification from Friday to Sunday, September 21 through 23.
Dubbed Windows of Soul, the event to return life to the 200 block of Hanover Street is the brainchild of Trenton based artists Will “Kasso” Condry and Leon Rainbow. The two muralists, who work together and independently, devised the project after nearly a decade of successfully creating scores of murals throughout the city.
Says Rainbow, “Two years ago me and ‘Kasso’ got the idea to paint over the boarded up parts of the
abandoned buildings. We really want to do the whole city.”
Rainbow’s goal is no exaggeration and is already in gear.
Over the past several years the two artists, along with other artists of mixed background and race,
decided that there was too much decay and not enough art. Instead of complaining or accepting it, the
artists launched an offensive against urban blight with an arsenal of talent, creativity, humanity, and
aerosol paint. 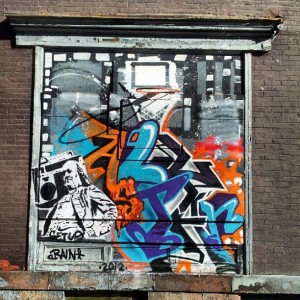 Windows Of Soul Collaboration- Leon Rainbow x Get Up Art

While the latter is the medium of choice for these muralist inspired by the 1980s graffiti movement,
“Kasso” (the name the artist uses to represent himself and work) and Rainbow take the high road and
work in partnership with property owners and community organizations.
The obvious fruits of their efforts are their varied themed murals blossoming throughout the city,
including a recently sprayed one at the entrance to the First United Methodist Church on South Broad
Street, several blocks from the state house dome.
There is also the annual Jersey Fresh Jam held in Trenton. Launched in 2005 by artists with a desire to
get other young mural artists together, it’s now touted as New Jersey’s premier Hip Hop Festival. That
festival of aerosol and music attracts hundreds to Trenton and is hosted by the Trenton based recycling
company, TerraCycle.
While freshly painted city walls and people showing up usually equal success, the two artists do
something more, something intangible yet vital. Their efforts help galvanize young creative talents,
energies, and imaginations. By doing so, they seem to be to be in tune with influential American poet
and New Jersey native William Carlos Williams whose words on the human imagination are apt: “If it
is not a dance, a song, it becomes an outcry, a protest. If it is not flamboyance it becomes deformity; if
it is not art, it becomes crime.”
Trenton native “Kasso” says his actions are deliberate and focus on the positive. “I looked around and
said, ‘It doesn’t have to be like this.’ You just have to take the initiative. Then others will join in. Then
there’s power in the numbers.”
Windows of Soul is one such opportunity for others to join in, view art, take mural and graffiti
workshops, and even help install the fifty art panels over the windows and doors of soulless structures.
The weekend will end with a block party and a ribbon cutting ceremony to announce the transformation
of street to gallery.

Developed in cooperation with the Trenton Downtown Association (TDA) and the Trenton Atelier, an
active group of downtown Trenton artists, the soul event is clearly Trenton based, but its vision is
global.
“Kasso” and Rainbow, working through the newly formed non-profit organization SAGE (Stylez
Advancing Graffiti’s Evolution) Collective, decided that artists outside the city should also have the
opportunity to get involved. So the mid-30 year old coordinators digitally invited the world. Now art
from Belgium and Italy, to name a few places, will mix with American art on Trenton walls.
Although Rainbow concedes that the event’s epicenter at TDA’s 219 Hanover Street gallery and office
space is “a kind of rough block,” he says the weekend is about learning how to make art that can
change the environment. Since the art work will be preselected, visitors should join in the spirit of
supporting the current effort and learning for the future.
When asked about the backgrounds that have led to careers teaching, designing, and creating murals
and art, “Kasso” and Rainbow draw attention to their formative years.
While “Kasso” says he came from a poor section of Trenton, he notes that his family — a truck driving
father and stay at home mother — gave him simple gifts that continue to give. “My family is very
artistic. My brother is a graphic designer. My sister works as a manager for a non-profit and is a poet.
My parents are not visual artists, but they’re great story tellers. We were really poor so we had to
improvise. All my subject matter is story-based. It has a beginning, middle, and end. That comes from
my family. I remember the stories like movies. My mother was supportive and bought us sketch pads,”
he says.
The sketch pads led the young artist to an interest in creating drawings influenced by graffiti and comic
books. The free Saturday art classes offered by Artworks in Trenton fed his hunger to learn more and
was part of the path that took him to the College of New Jersey to study fine arts and art history.
An interest in mural painting connected him to the internationally recognized Philadelphia Mural
Program, where he was employed for five years as a member of their educational program and an
assistant muralist. Of his time in Philadelphia, “Kasso” says, “I learned how massive projects are
organized. Since I never got the opportunity to do my own projects, I left and took what I learned for
my own projects. I’ve always been my own person. I am not going to wait for someone to make an
opportunity. I make my own.”
Rainbow too makes his own opportunities. A native of San Jose, CA, Rainbow (a family name from the
Quechan tribe in Arizona) is a Trenton transplant. After his draftsman step-father and his mother, who
had a house cleaning business and other jobs, moved the family to New Jersey in the late 1990s,
Rainbow gravitated to the Trenton area and studied web design at Mercer County Community College.
With an early interest in art encouraged by his mother, Rainbow began mixing graffiti and drafting. He
also took art classes at the college, including those conducted by prominent New Jersey artist Mel
Leipzig.
“The two of them are really terrific,” says Leipzig who has a long history of coordinating and
contributing to art projects in the state’s capital city. Graffiti art, the artist says, “is a new form of art.
It’s not what I do, but I respect these artists. It’s not easy. “
About his former student, the senior artist says, “Leon’s been a force for the arts in Trenton. He just
keeps going at it. He’s dogged in his pursuit of his art and his commitment to the city. It’s terrific that
there’s someone like him in Trenton. “
Of “Kasso” and Rainbow’s current efforts, Leipzig says, “It is one positive thing in Trenton during at
time of unbelievable negativity. It shows that there are good decent people and young artists in the city.
It’s not a monetary thing. It’s just in their nature to do something. And artistic creativity is a boon for
the city, take Hoboken and Brooklyn. Everywhere artists go, they do something good. It’s a ray of hope
in the city. “
Trenton resident and creator — along with famed writer Norman Mailer — of the seminal book on the
American graffiti art movement, “The Faith in Graffiti,” Jon Naar agrees. “I think they’re important
artists who are doing a superb job of organizing in a city in the state of collapse, where we’re not
getting the leadership. They are far more than graffiti writers. They work with children and the
community. They are important mural artists who should be recognized,” says Naar.
The 92-year-old Naar, whose photographs are in numerous museum collections, says that he plans to
photograph the artists over the block transformation weekend and adds, “This is absolutely way to go”
to take back the city.
The taking back is already in action. Thirty students from the Bonner Center for Civic and Community
Engagement at the College of New Jersey recently arrived on Hanover Street to clear trash from the
lots set for the block party. Art work from both professional and amateur artists is arriving for
consideration. Calls for donated materials and support are being answered. And given the draught of
good news coming from Trenton, the event is generating light and hope.
As for the souls who have been attempting to open the windows for the past few years?
“It’s a long time coming, but it feels great,” says “Kasso.”
“I’m so excited that it’s all coming together. I think it will be a great inaugural,” says Rainbow.
Windows of Soul, TDA’s Gallery 219, 219 East Hanover Street. Opens Friday, September 21, 6 to 10
p.m. Activities continue Saturday, September 22, with art workshops and demonstrations from 10 a.m.
to 6 p.m. The event concludes on Sunday, September 23, with music, art installation, and dedication, 1
p.m. to 6 p.m. http://sagecoalitionnj.com/