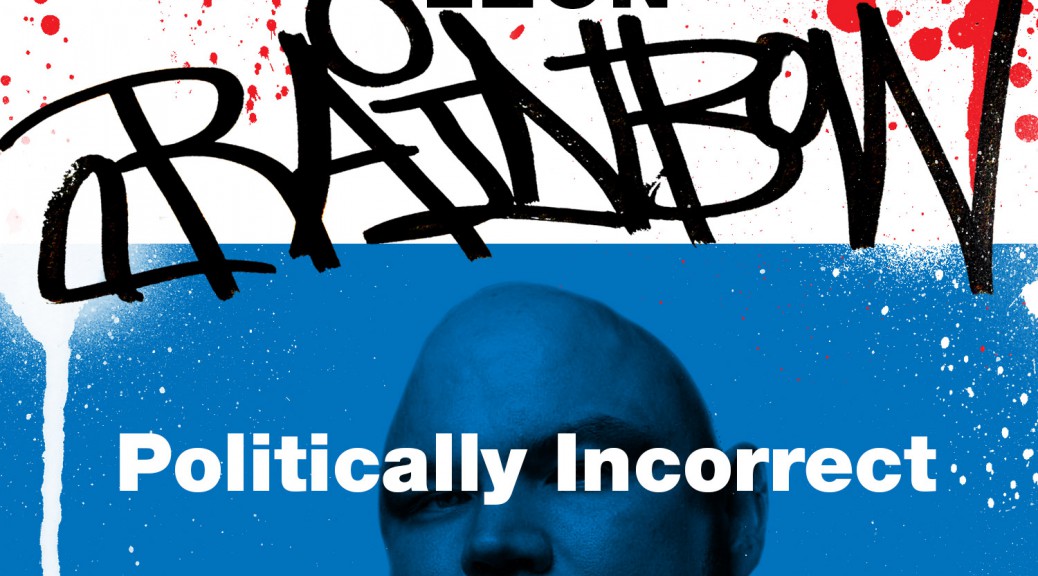 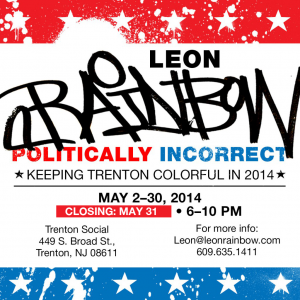 Of late, urban artist Leon Rainbow has moved in a fresh direction, creating new murals on city walls full of vibrant color, playful lines, yet teeming with deeper meaning. Lately, Rainbow has set about creating similar expressions on canvas, as well as found objects. The result is Politically Incorrect, on view at Trenton Social from May 2 to 30.

Rainbow, a Trenton resident, didn’t intend for his show to arrive at a time of political turbulence in his home city, where the mayor was recently convicted of corruption and removed, and an unruly campaign to replace him is heating up. “I am an artist first, but what’s been going on in city politics adds a new dimension to the work,” Rainbow says. “You look at City Hall, then at us painting the truth out in the streets and you wonder, who’s really politically incorrect here?” he says.

The work in Politically Incorrect incorporates a style that had its genesis in a watercolor mixed media series Rainbow did in 2010 called Freestyle Fridays. In Freestyle Fridays he released a new freeform piece on his website each week for a year. These freeform pieces helped him to develop a style that incorporates complex patterns and designs with imagery and symbolism.

This style further evolved in murals Rainbow subsequently created, one in Trenton (on Clinton and Hudson Street), and another, sponsored by Miller Brewing, in the Fishtown section of Philadelphia (on Frankford Street). In Politically Incorrect, Rainbow is using the movement, style and color of his street work to influence his paintings on canvas, then working the canvases back into the street art. This back and forth cross-fertilization builds new styles and concepts with each piece. Politically Incorrect is an ongoing project.